The History of OPH

While businesses were relocating to the northern suburbs in the late 1980s and 90s, OPH’s Executive Chairman and Founder Gerald Olitzki saw this period as an opportunity – in 1989 he bought his first building on the then Van der Bijl Square. That initial investment was the foundation for what has become one of the largest private property portfolios in the country. 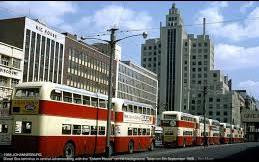 In the early 1990s Olitzki approached the city council with the idea of converting the untidy bus terminus of Van der Bijl Square into a people-friendly place. It took seven years to be approved, and today it is a place where workers in the area can buy their lunch, relax in the sun, get their hair done, do their banking, and chill at night in several nightclubs. In 1999 it was renamed Gandhi Square, after Mahatma Gandhi, who lived in Johannesburg for 12 of his 21 years in South Africa, formulating his passive resistance movement.

Olitzki teamed up with Neil Fraser, then director of the Central Johannesburg Partnership, and Graham Reid, then head of the Johannesburg Development Agency. They shared his vision of re-imagining the square and helped negotiate a 45-year lease on the space. With the revamp of the square, the city’s and indeed South Africa’s first City Improvement District was born, where property owners take charge of maintaining and cleaning the district, as well as placing security guards on the streets.

The square was just the start of Olitzki’s plans. He conceived the idea of a west-east spine, running from the Magistrates’ Court in the west, along Main Street, through Gandhi Square, and up Fox Street to the Carlton Centre. This is now called the Gandhi Square Precinct, with the square the vibrant heart at the centre, pumping with life.

Now the Main Street Mall, the Fox Street Mall, and Gandhi Square are lively people places, with some 250 000 people passing through Gandhi Square daily. These projects are widely regarded as the major catalyst for the revitalisation of the inner city, prompting other subsequent rejuvenation initiatives.

Nearby buildings, which were once derelict and occupied by homeless people living in horrendous conditions are now busy, well-run office blocks. Though they have a modern feel, they have been restored with consideration to their heritage.

OPH can proudly claim to be a major job creator in the CBD, with its developments contributing significantly to job creation in the inner city.  While more and more buildings in the precinct are receiving the OPH treatment.